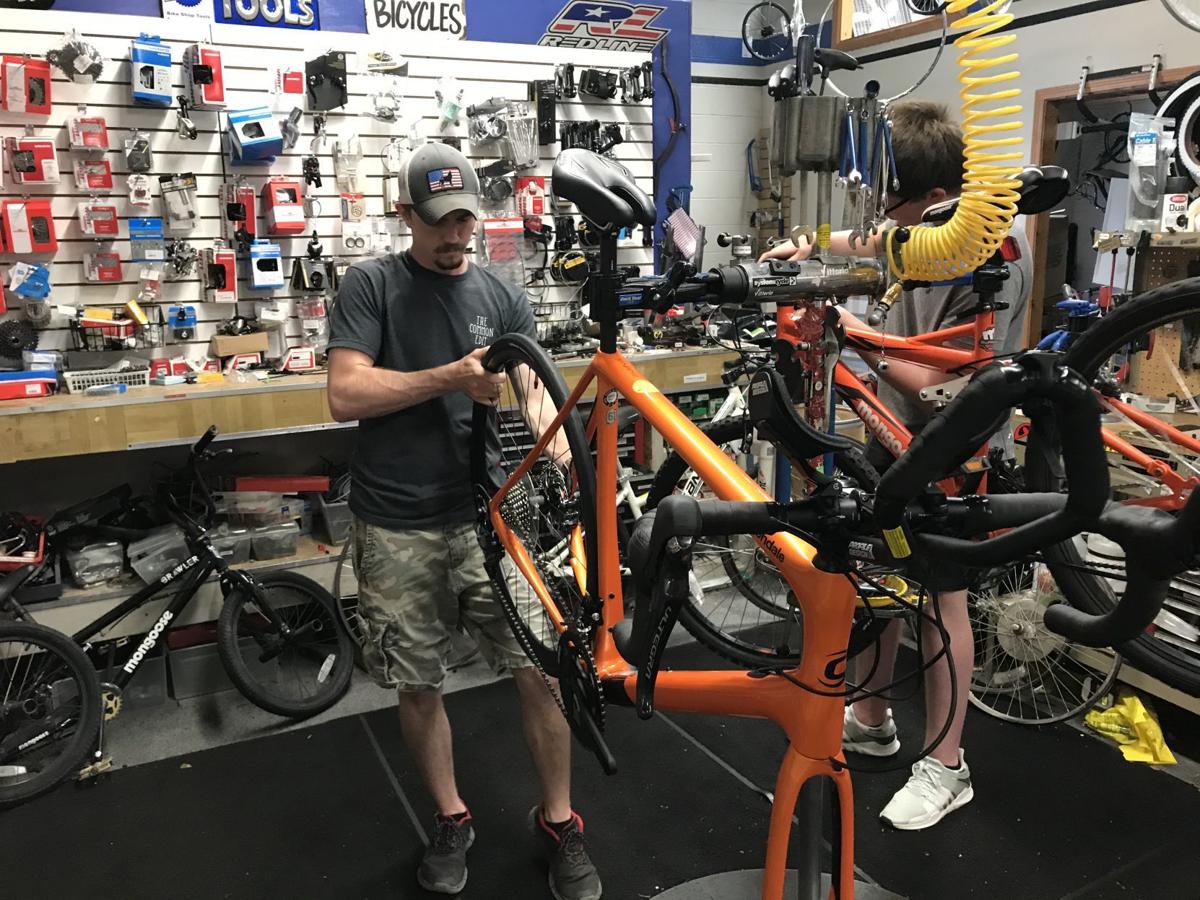 Dylan Commons works on a bike at Breakaway Bike and Fitness in downtown Peru on Tuesday afternoon. Business has increased at the shop during the pandemic as it has at many bike shops across the country. 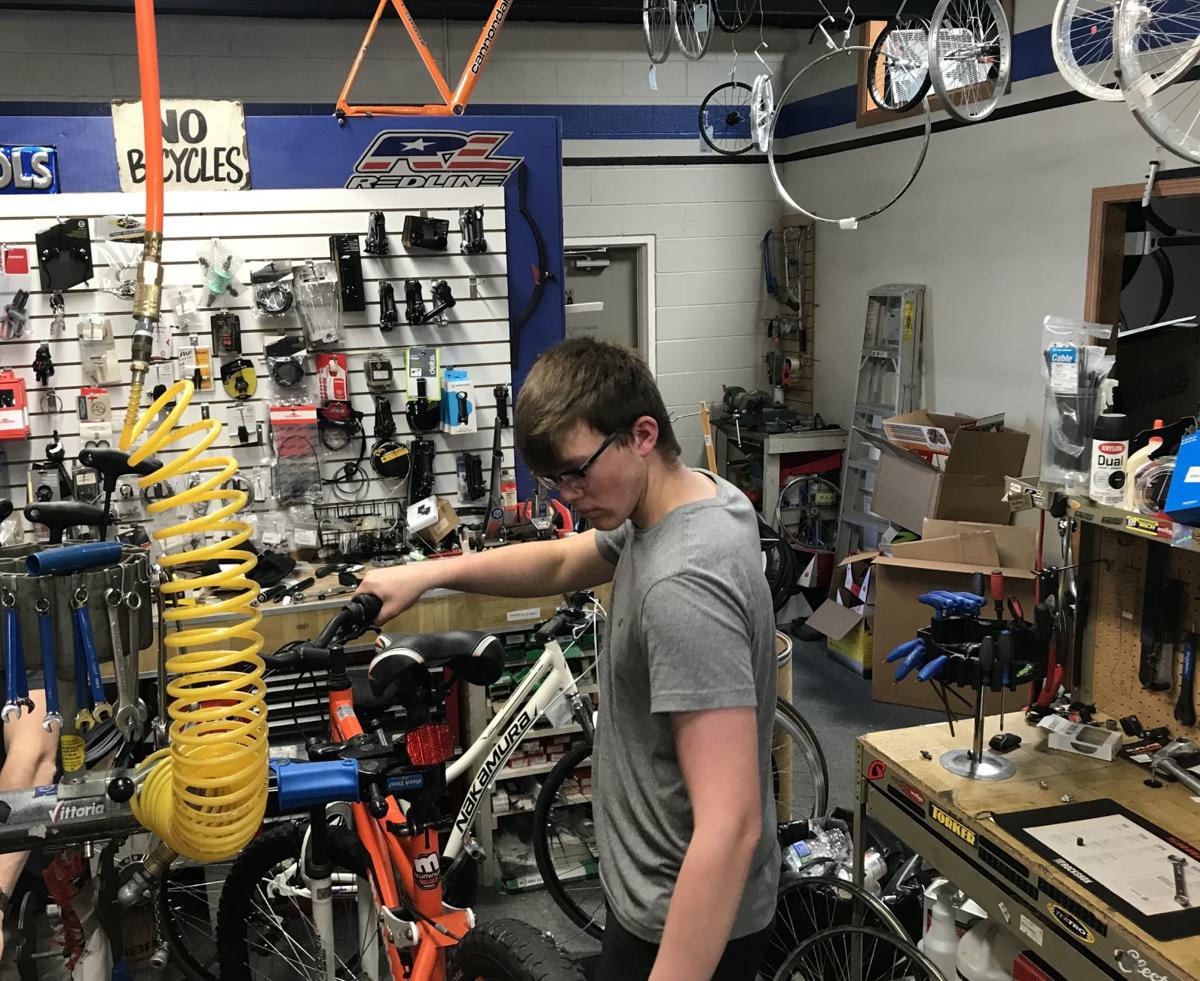 Brendan Stout makes adjustments to a bike on Tuesday afternoon at Breakaway Bike and Fitness in downtown Peru.

Dylan Commons works on a bike at Breakaway Bike and Fitness in downtown Peru on Tuesday afternoon. Business has increased at the shop during the pandemic as it has at many bike shops across the country.

Brendan Stout makes adjustments to a bike on Tuesday afternoon at Breakaway Bike and Fitness in downtown Peru.

Though the coronavirus pandemic has hit many businesses hard, Peru’s local bike shop is thriving as residents look to get outside with families as they also maintain their distance from others.

“It really went crazy selling stuff … probably a month ago,” Mike Inglehearn, owner of Breakaway Bike and Fitness in downtown Peru, told the Tribune on Tuesday.

Inglehearn had just finished up helping one couple as two employees worked on bikes behind the counter.

The COVID-19 outbreak has kept everyone in the shop busy. Customers have come in interested in buying new bikes or just getting an older bike dusted off and tuned up.

“A little of everything,” Inglehearn said.

So much so that the problem he faces now will be getting his hands on the most popular models to sell.

Though he still has bikes, he said that some of the ones he is sold out of won’t be back in stock until late summer.

And judging by the calls he is getting from markets outside of his, he is not the only one with that problem.

“We have people calling from Fort Wayne, Kokomo,” he said.

Inglehearn’s shop is experiencing what many around the country are seeing right now.

Brian Morris, a bike shop owner in Arizona told The Associated Press recently that he initially worried he was going to have to shut his business down for a while as stay-at-home orders went into effect, but the executive order from the governor there allowed him to stay open.

“We’ve seen a huge spike in sales across the board, from beach cruisers all the way up to high-end mountain bikes, road bikes,” Morris said. “A lot of tubes, tires tools as a lot of people are learning to do home repairs with a lot of shops being overloaded in service. We have seen a major spike and had a hard time keeping up with the demand at times.”

The same has been true in California, according to another AP story.

“We have a three-day sale once a year literally called ‘the madness sale.’ This just feels like two straight months of madness sales,” said Dale Ollison, a bike mechanic at Hank and Frank Bicycles, an Oakland, California, shop that is selling online and doing curbside pick-ups.

Oakland was the first California city to launch a “slow streets” program in April and has closed 20 miles (32 kilometers) of city streets to cars to create a safer outdoor space for pedestrians and cyclists. San Francisco soon followed, closing sections of twelve streets in a city that already has a robust network of bike lanes.

The San Francisco Bicycle Coalition, an advocacy and education group, has seen demand for its classes on city biking – now online – jump from 30 participants to more than 100, Executive Director Brian Wiedenmeier said.

“A lot of folks are dusting off their bikes to get themselves and their families a bit of fresh air during all of this,” he said. “It’s the perfect tool for this time.”

Locally, Inglehearn said he is seeing much the same thing.

People, he said, first seemed to react to stay-at-home guidance from the state as a directive to stay in their homes or at least on their property. But as officials started in with the message that it was indeed OK to enjoy outdoor recreation, Inglehearn said people seemed to start to look to bikes as a way to not only get outside but to spend time with their family .

That was helped along by stimulus checks from the federal government and the presence of the area’s Nickel Plate Trail.

“The average rider is riding the trail,” he said.