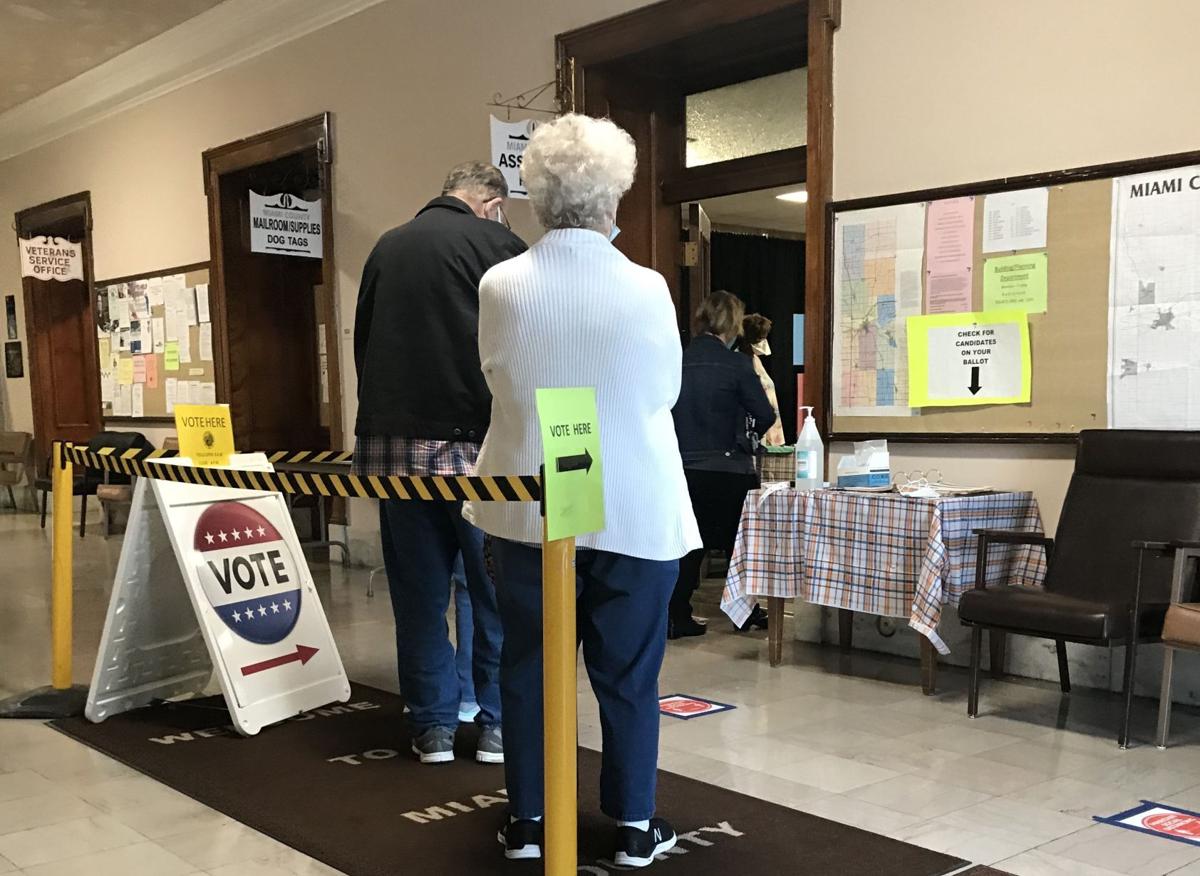 Voters stand in line at the Miami County courthouse on the first day of early voting for the 2020 election. 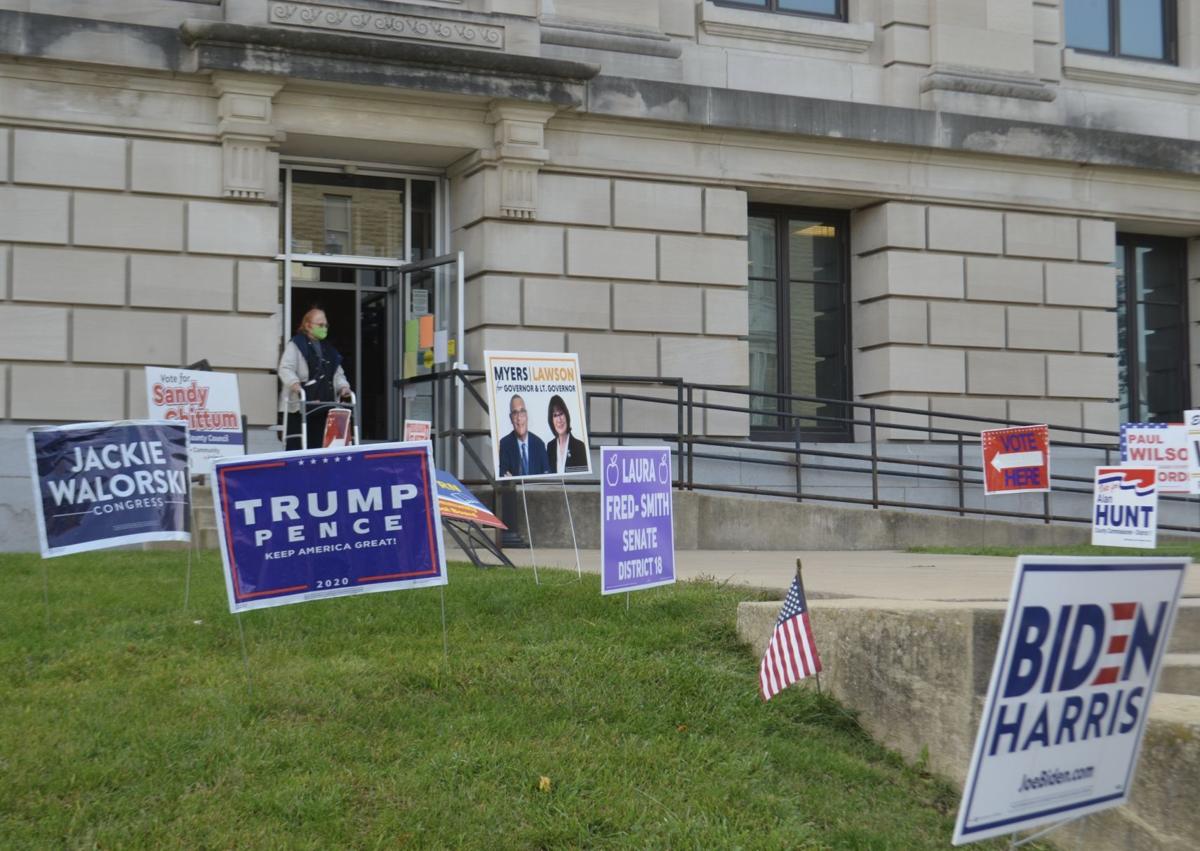 Signs sit in the lawn at the north entrance of the Miami County courthouse during the first day of early voting on Tuesday. 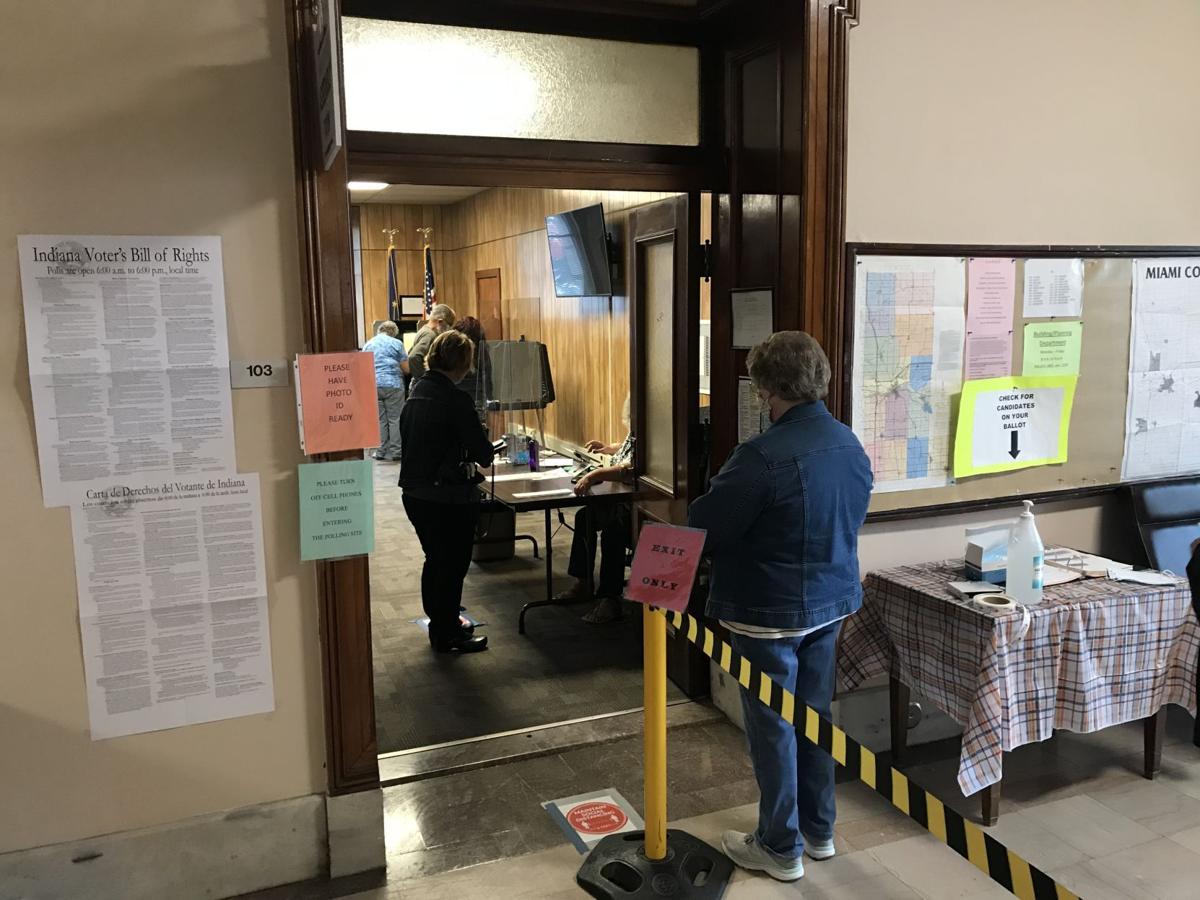 A voter talks with a poll worker at the Miami County courthouse on Tuesday morning.

Voters stand in line at the Miami County courthouse on the first day of early voting for the 2020 election.

Signs sit in the lawn at the north entrance of the Miami County courthouse during the first day of early voting on Tuesday.

A voter talks with a poll worker at the Miami County courthouse on Tuesday morning.

Early voting began Tuesday with long lines at the Miami County courthouse but officials still aren’t sure whether this year’s hotly contested presidential election will translate to voter turnout higher than other years when the country’s highest office was on the ballot.

The line for early voting at the polling place at the Miami County courthouse extended outside the north entrance door for much of the morning, County Clerk Sherry Raber said Tuesday.

“But I think it’s typical,” she said.

Though voting and the coming election has been in the headlines more than usual because of the coronavirus pandemic and concerns about social distancing and crowding at polling places, Raber said she felt that the turnout for the first day, though perhaps slightly above normal, wasn’t beyond what anybody expected or was prepared for.

She said county polling workers have been hard at work preparing polling places for a year where extra precautions need to be taken for people’s health.

There is plenty of personal protective equipment available she said and poll workers will be cleaning machines and common areas as the days progress.

Mary Kaye Jones, Miami County first deputy of voter registration, said she thought there was a possibility that voter turnout may exceed the 2016 General Election when it hit 59 percent, or 13,781 voters out of 23,197 of those registered.

While she agreed that the first day of early voting at the courthouse didn’t greatly exceed anything she has seen in the past, she said she had seen more people showing up to register at the last minute than in other years.

“A lot of first time voters,” she said.

As well as those who just wanted to make sure that their registration was up to date.

“Yesterday we were swamped with people wanting to know, ‘Are we registered?,’” she said. “To me I thought that was highly unusual.”

Getting a good read on it is difficult.

Raber said those requesting mail-in ballots hadn’t exceeded the primary election when such ballots were available to everyone because of the pandemic. So far the county has mailed out 1,247 absentee ballots, compared to 1,619 during the primary.

The deadline to request such a ballot, according to the Indiana Secretary of State website, is Oct. 22. The website says a mail-in ballot can be requested if:

You have a specific, reasonable expectation that you will be absent from the county on Election Day during the entire 12 hours that the polls are open (6 am until 6 pm).

Amid pandemic, TF South connects with students via get out the vote drive, virtual homecoming

You have a disability.

You will have official election duties outside of your voting precinct.

You are scheduled to work at your regular place of employment during the entire 12 hours that the polls are open.

You are prevented from voting because of a religious discipline or religious holiday during the entire 12 hours that the polls are open.

You are a participant in the state’s address confidentiality program.

You are a member of the military or a public safety officer.

You are prevented from voting due to the unavailability of transportation to the polls.

Raber said Tuesday that she expected people will be more willing to travel to the polls now that the state has opened back up somewhat from the days of Gov. Eric Holcomb’s stay-at-home order at the beginning of the pandemic.

For those that do intend to head to the polls and want to vote early they can do so by visiting the courthouse polling location between now and Oct. 31 on weekdays between 8 a.m. and 4 p.m.

There will also be Saturday early voting available at the courthouse, Denver Baptist Church, Converse Town Hall and Bunker Hill Free Baptist Church on Oct. 24 and Oct. 31 between 10 a.m. and 5 p.m.

Polls will also be open at the courthouse on Nov. 2, the day before Election Day, from 8 a.m. to noon.