Skip to main content
You are the owner of this article.
Edit Article Add New Article
You have permission to edit this article.
Edit
Home
News
Sports
Obituaries
Opinion
Classifieds
Jobs
Archives
e-Edition
Contact Us
Share This
1 of 2 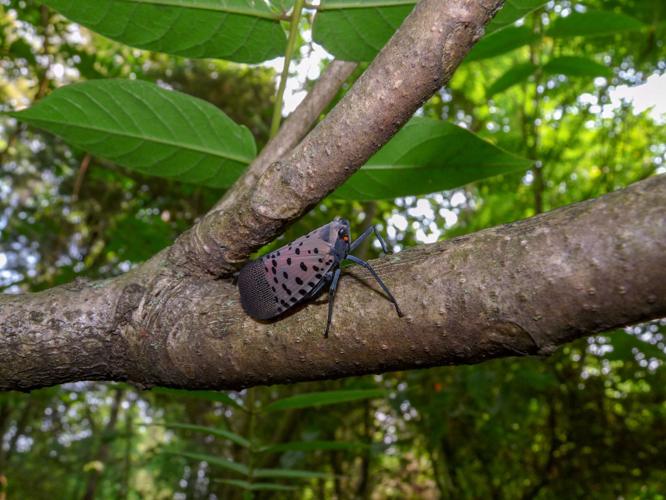 The spotted lanternfly, or Lycorma delicatula, was found in Indiana for the first time in Switzerland County in 2021. 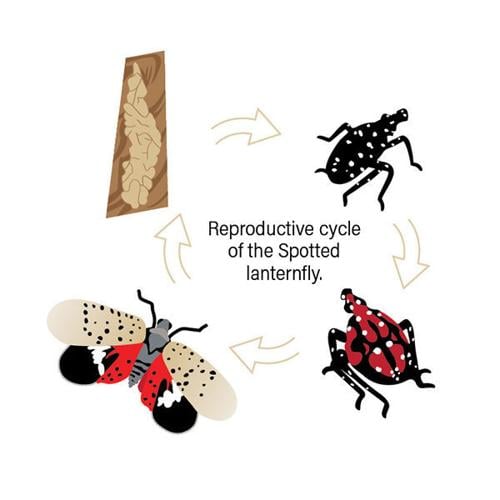 This is an illustration of the reproductive cycle of the spotted lanternfly.

The spotted lanternfly, or Lycorma delicatula, was found in Indiana for the first time in Switzerland County in 2021.

This is an illustration of the reproductive cycle of the spotted lanternfly.

Last summer, the Indiana Department of Natural Resources (DNR) asked all Hoosiers to be on the lookout for invasive species, including the spotted lanternfly, or Lycorma delicatula.

That alert has been heightened this year as the spotted lanternfly has now been identified in northern Indiana.

Seen in July in Huntington County, the spotted lanternfly had been initially sighted last year in Switzerland County.

“While the spotted lanternfly feeds on over 100 different types of plants, the insect can reproduce only when feeding on walnut trees, grape vines or tree of heaven,” said Sadof.

In response to a Plain Dealer request, Sadof said the that though the spotted lanternfly had not been reported in Wabash County yet, people should remain vigilant.

“Residents need to look for (it) and report,” said Sadof.

Purdue University assistant professor of horticulture crop entomology Elizabeth Long said one of the best defenses that wine grape growers can take against the spotted lanternfly is learning to identify the life stages of the insect and remaining vigilant in inspecting for them.

“Several of the insecticides grape growers currently use for other insect pests will also knock down the spotted lanternfly, so there is no need to make additional sprays as a preventative at this time,” Long said. “Looking to next season, the same strategy is needed. Keeping an eye out for spotted lanternfly hitchhikers and avoiding moving items that are likely to accidentally move insects along are key. Spotted lanternfly populations feeding on wine grape vines can severely reduce winter hardiness or kill the crop all together.”

Brock Harpur, Purdue assistant professor of entomology, said bee-keeping equipment can also provide the perfect spot for spotted lanternflies to lay eggs, allowing the insect to travel around the state.

Harpur said bees make good use of any honeydew they collect, but that isn’t desirable. If a colony does collect honeydew, a beekeeper may notice the honey has a smokey taste and smell and is less sweet than typical honey. The honeydew-tainted product has a darker brown color and a notable aftertaste.

Though the full-grown adults have beautiful coloring and patterns, spotted lanternfly eggs resemble a splash of mud, making them easy to overlook on large vehicles traveling from state to state. Homeowners should, therefore, also remain vigilant in keeping populations in check, Sadof said, as the honeydew secretions from the insect are frequently spread across homes and structures and are extremely difficult to remove when dried.

DNR director of the division of entomology and plant pathology (DEPP) Megan Abraham said people in Wabash County were “most likely” inundated with the gypsy moth last year.

“This invasive pest seems to have exploded in population numbers this year for some reason,” said Abraham.

Abraham said in addition to the gypsy moth, “if you have any ash trees left in Wabash County I’m sure you’ve seen the damage that emerald ash borer has done.”

Otherwise, Abraham said some of the pests and pathogens that they were worried about coming into Indiana were the Asian longhorned beetle, sudden oak death, boxwood blight, hemlock wooley adelgid and the box tree moth.

Abraham said that when the spotted lanternfly was found in Indiana for the first time last year in Switzerland County was “the farthest west the insect has been found.”

“This federally regulated invasive species has a detrimental impact upon plant growth and fruit production, especially in vineyards and orchards,” said Abraham.

Abraham said a homeowner in Vevay contacted DNR’s DEPP with a picture that was taken outside his home of a fourth instar, or developmental stage, larvae.

“DEPP staff surveyed the site and discovered an infestation in the woodlot adjacent to a few homes in the area,” said Abraham.

Abraham said the site is within two miles of the Ohio River and the Markland Dam.

Abraham said DEPP and USDA are investigating to determine exactly how large the infestation is and where it could have come from, as well as how to limit the spread and eradicate the population.

Abraham said the spotted lanternfly is a planthopper that originated in Asia. It was first discovered in the United States in Pennsylvania in 2014.

“The Pennsylvania Department of Agriculture tried to limit the spread of this pest, but it excels at being a hitchhiker and is often spread unknowingly by humans,” said Abraham.

Abraham said the adult spotted lanternfly has two sets of wings, and the underwing has a very distinct red color with spots on the outer wings. The fourth instar of the insect is bright red with black and white markings. The egg masses of this invasive insect look like mud and they can be spread by vehicle transport including recreational vehicles, cargo carriers, or truck transport, and freight trains. They can also be spread through trade materials sold in infested areas that are shipped out of state including nursery stock, outdoor furniture and lumber.

“Anyone receiving goods from the east coast should inspect for signs of the insect, especially if the commodity is to be kept outdoors,” said Abraham.

Abraham said the spotted lanternfly prefers to feed on tree of heaven or Ailanthus altissima, but it has been found on more than 103 species of plant including walnut, oak, maple and various fruit trees.

“This insect is often found on grapevines in vineyards. Adult insects have piercing, sucking mouthparts and weaken the plants through feeding on them, which can make it difficult for the plant to survive the winter months. Congregating spotted lanternfly insects produce a sticky substance called ‘honeydew’ in large quantities that over time becomes infested with sooty mold that attracts other pests in the area,” said Abraham. “The bright color of both the last instars and the adults of the insect should be present at this time of the year.”

Anyone that spots signs of the spotted lanternfly should contact DEPP by calling 866-NO EXOTIC, or 866-663-9684, or emailing DEPP@dnr.IN.gov.

Rob Burgess, Wabash Plain Dealer editor, may be reached by email at rburgess