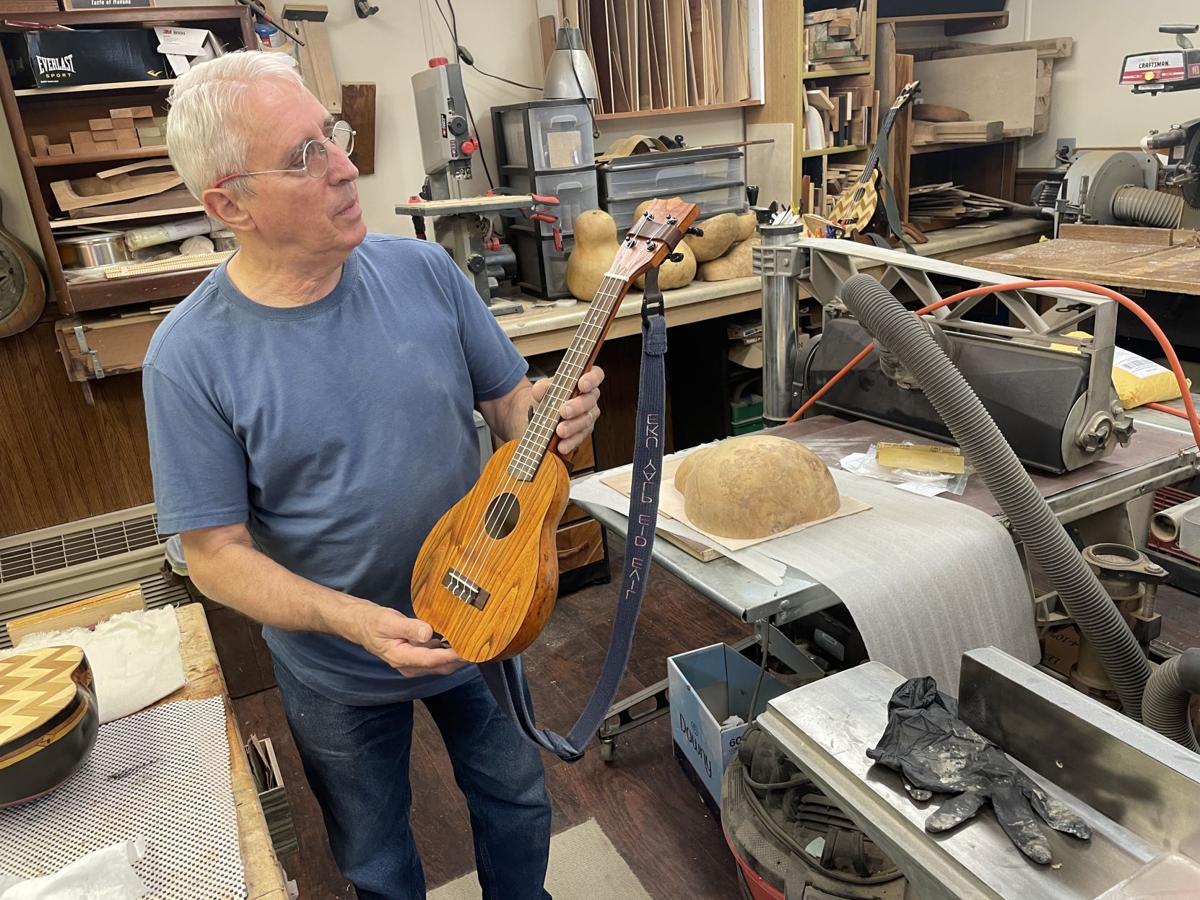 Ron Luginbill looks over one of his handmade gourd ukuleles in his Peru workshop on Sept. 2. 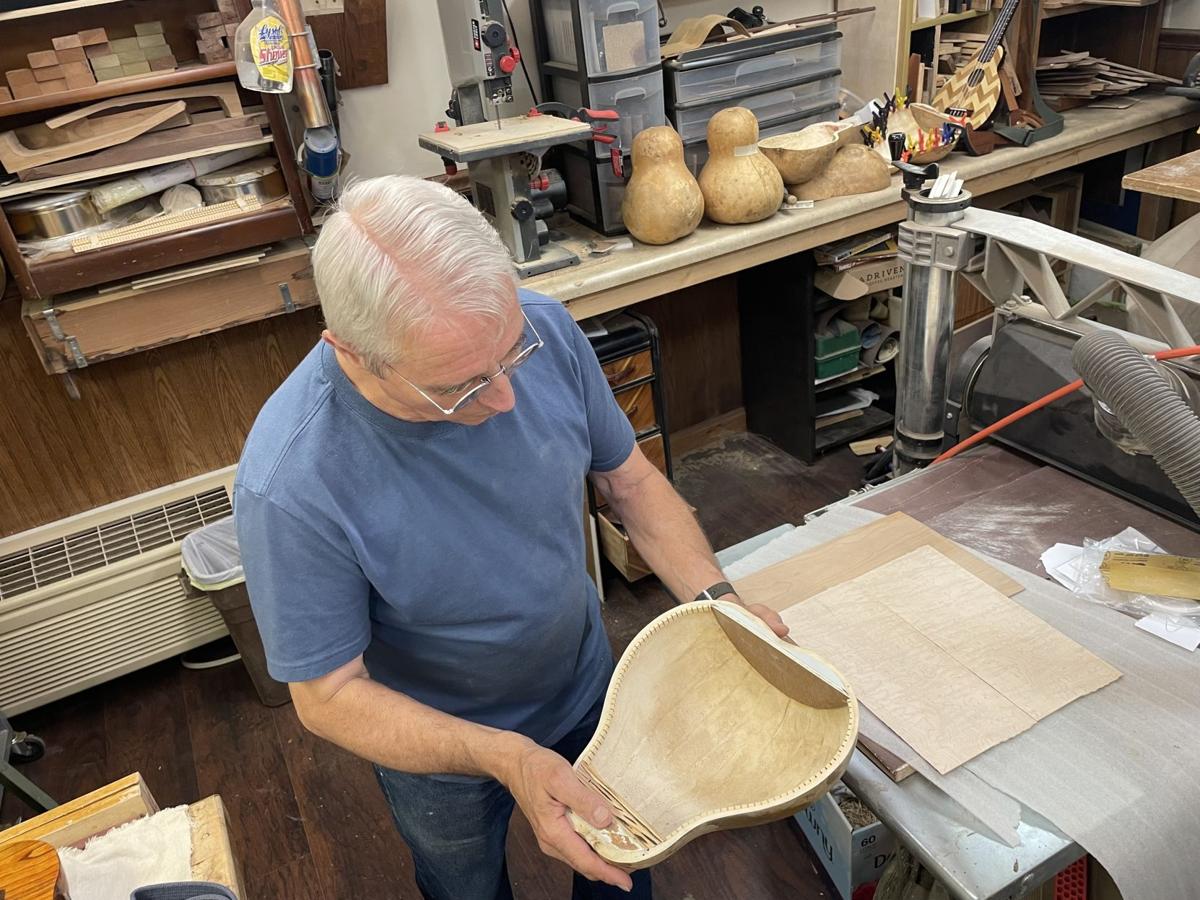 Luginbill describes the process of creating a ukulele from a dried gourd in his workshop on Sept. 2. 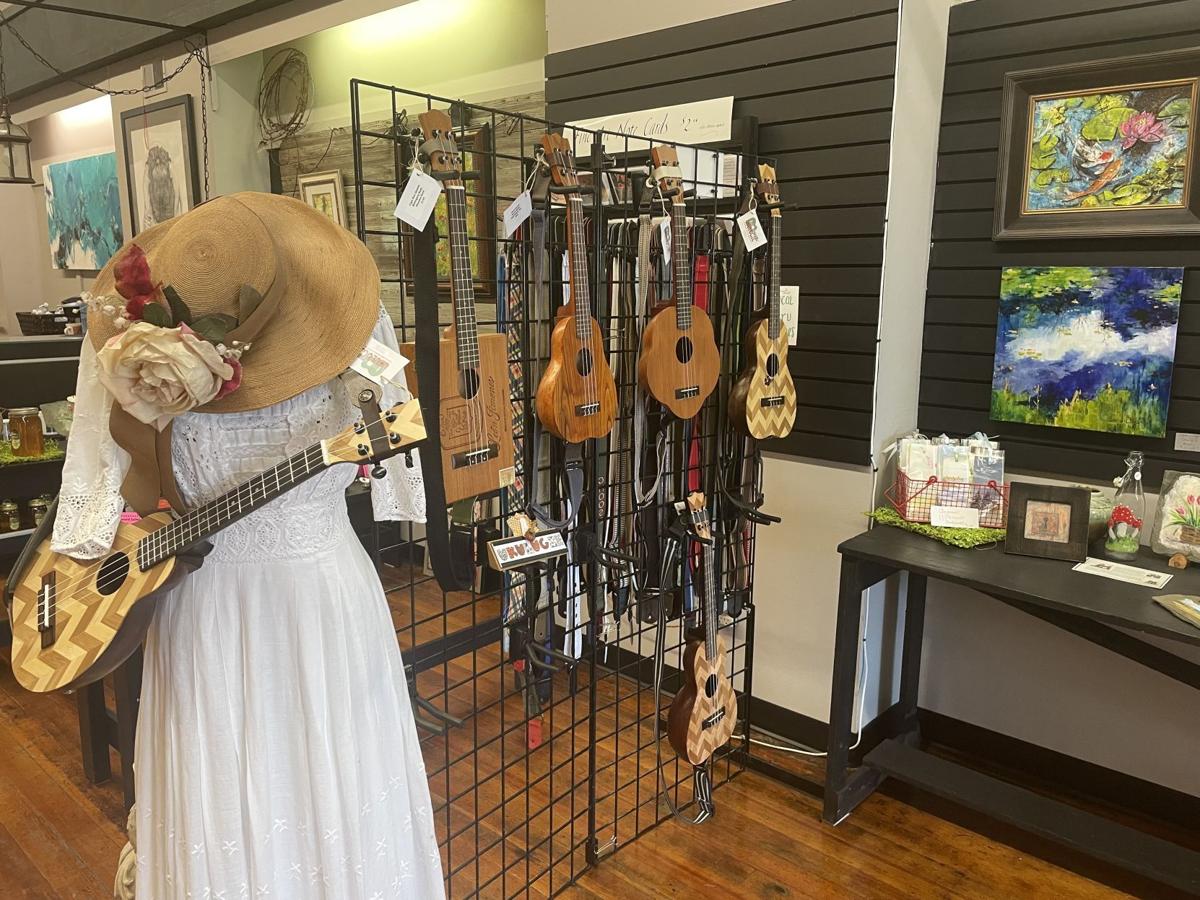 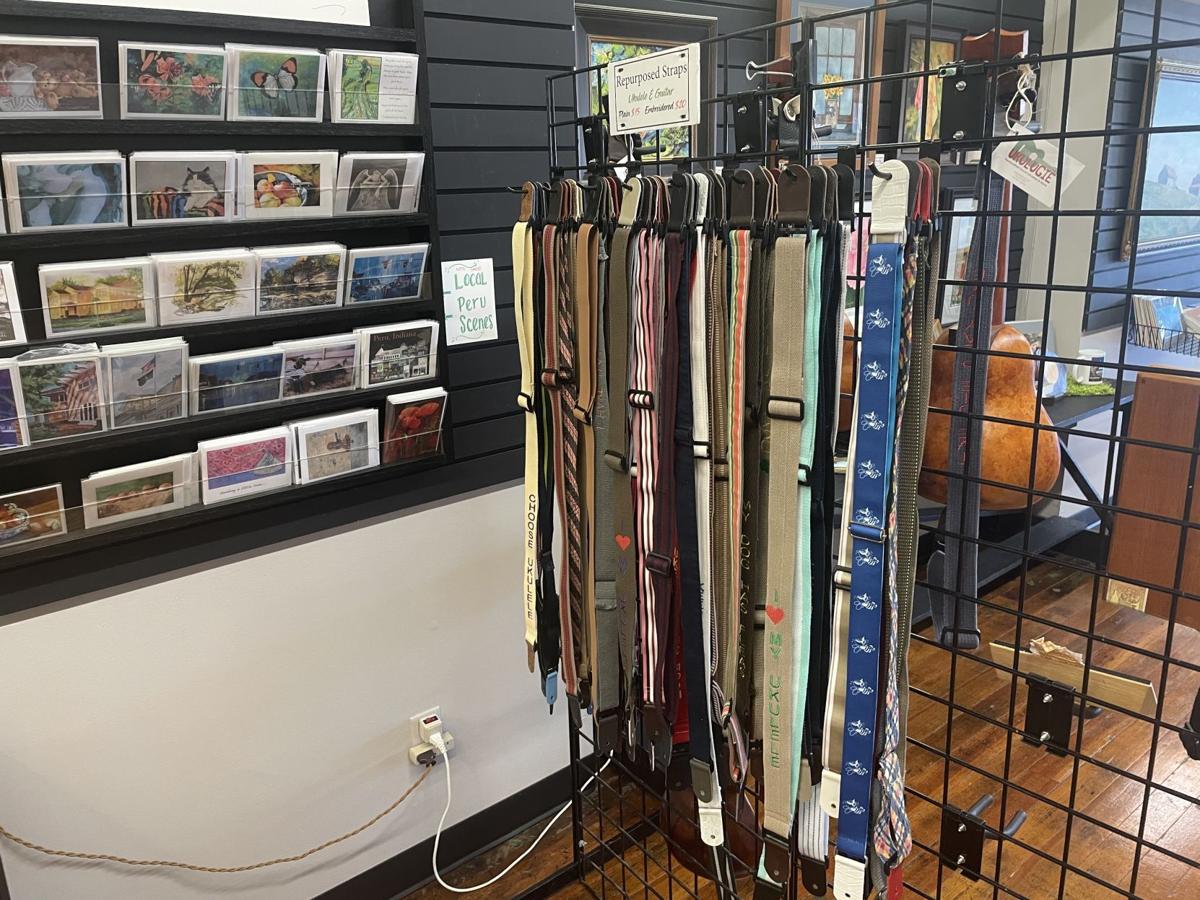 Straps, created for Luginbill’s ukuleles and other instruments, hang on display in Peru’s Gallery 15.

Ron Luginbill looks over one of his handmade gourd ukuleles in his Peru workshop on Sept. 2.

Luginbill describes the process of creating a ukulele from a dried gourd in his workshop on Sept. 2.

Straps, created for Luginbill’s ukuleles and other instruments, hang on display in Peru’s Gallery 15.

A local musician has taken the art making of music fully into in his own hands and is now building one of his favorite instruments for himself and others.

“I am mostly doing the gourd ones now,” Ron Luginbill told the Tribune on Thursday.

Standing in the workshop behind his Peru home, Luginbill talked a little about his own history playing music and how he came to start building ukuleles that catch the eye as well as the ear.

“This one is going to be mine,” he said, looking at one as he turned it over in his hands to reveal intricate dye work on the back of the rounded body.

That, he said, was done by a Decatur artist who works with different types of dyes and whom Luginbill has been working with to learn the craft of dyeing the bodies.

He’s pretty happy with the one that will be his.

“When I opened this up it just took my breath away,” he said.

As he talked, Luginbill, who also teaches ukulele lessons, jumped in conversation to and from the various phases of the work it takes to complete a single instrument – his passion for the projects, and the music, evident.

“The issue is always getting the neck set,” he set, pulling a neck down from a nearby shelf to demonstrate.

All of it started innocently enough, he said.

A near-lifelong guitarist, Luginbill said he took up the smaller four-string instrument after a 2014 trip to Hawaii sparked a simmering interest.

He bought a decent one on the trip, he said, and the interest has continued to grow.

“I don’t why I didn’t do this sooner,” he said, recalling how he felt once he started playing it. “I’ve had so much fun.”

Somewhere along the line he began buying ukuleles. Then he started taking some apart and fixing them up. And that led to more of the hands-on work.

About three or four years ago, he said, he was driving home with his wife from a trip and made a stop after seeing a roadside sign that said “Gourd Show.”

“I’ve never seen so many gourds in my life,” he said, laughing.

He bought a few and within a year or so, he said, he was making the gourd ukuleles at a fairly steady clip.

As time passed, he said, he has honed the methods he uses to split the gourds, clean them out, reinforce them and affix the tops.

As he talked it was clear the work has slowly evolved out of his own interest and the interest of others.

“I learn something every time,” he said.

He’s made contacts all around the state – meeting them at various art and music festivals – who have helped him not only source needed materials for the work, but who have shown interest in either buying the finished products or helping him sell them.

The gourds, for instance, come from a Brookston pumpkin patch that sells dried gourds called Kent’s Cucurbits. A neighbor craftsman, he said, provided the idea to use Corian – a material used to make countertops – for the saddles of the instruments rather than the traditional bone.

Realizing for him that the round backs of the gourd ukulele make it a little more difficult to hold, he also started making his own straps.

As he traveled to more festivals, and interest in the work continued to grow, his wife, Sarah Luginbill, said he ought to start displaying some of them in her downtown Peru art gallery, Gallery 15.

And that is where people can see, and buy, them now along with the straps he creates.

As the work continues, people can also likely get a little taste of how they sound.

The gallery these days hosts several different music events including an open mic night (third Thursday of the month, signup required), a Second Saturday concert and an acoustic “jam” (fourth Saturday of the month) where they might see one of the gourd ukuleles in action.