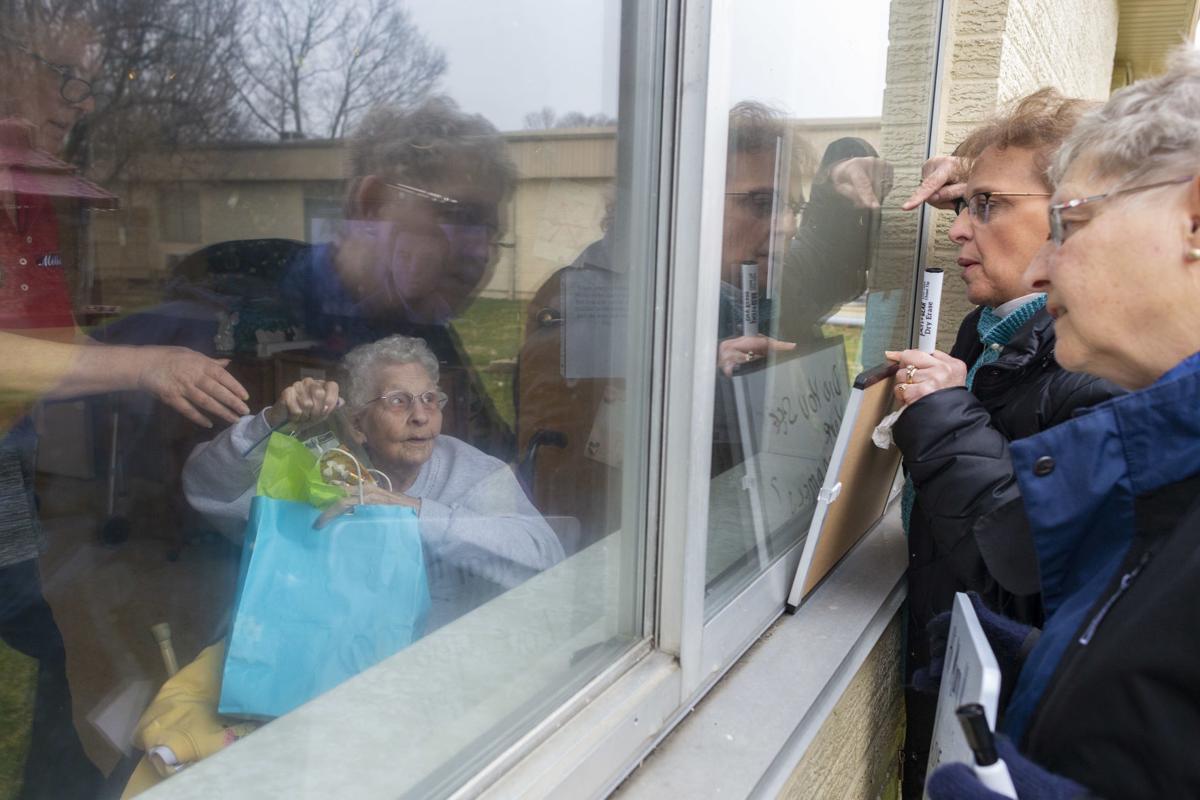 Sue Meadows points to a gift bag as she and her sister Sharon communicate with Patty Bowen, who takes care of their 95-year-old mother, Mary Jane. The family has been meeting through the window pane of Miller’s Merry Manor like this for more than two weeks after the nursing home closed its doors to the public to protect residents from a novel virus called COVID-19. 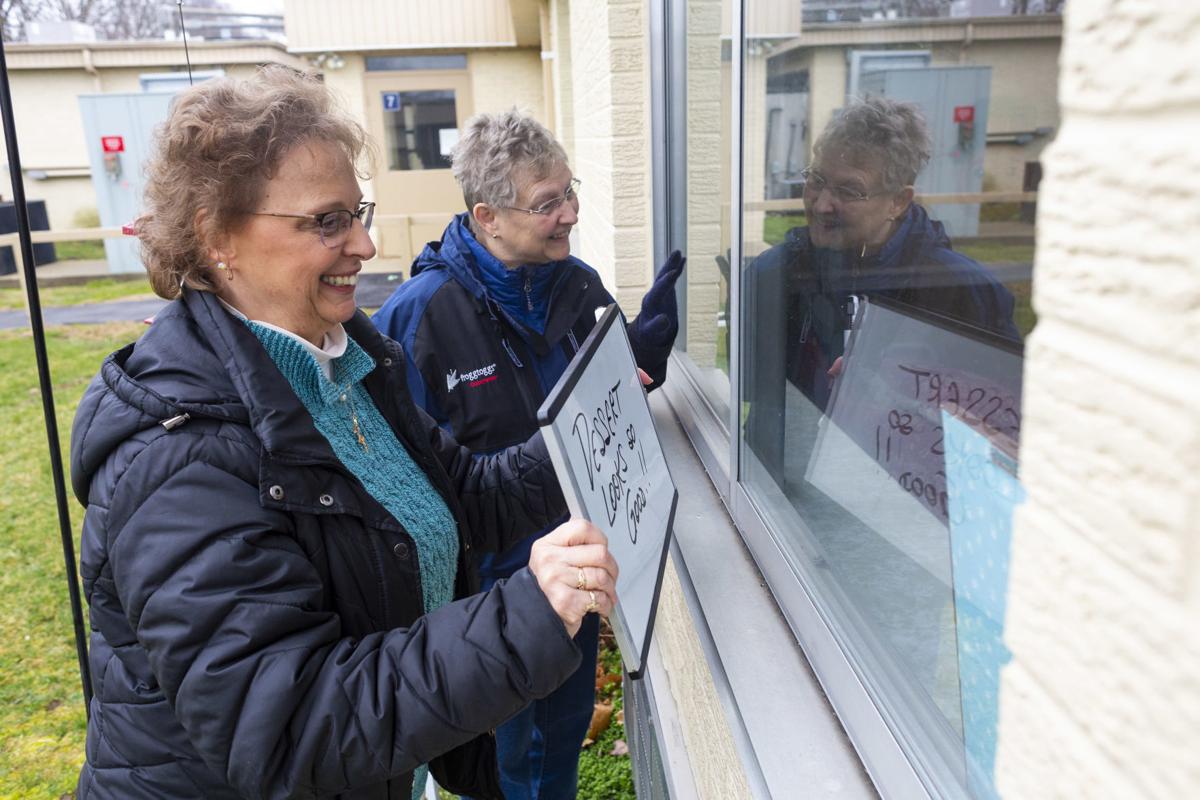 Sue Kline holds up a dry erase board that says “Dessert Looks so Good!!” while Sharon waves goodbye to her mother on March 19. 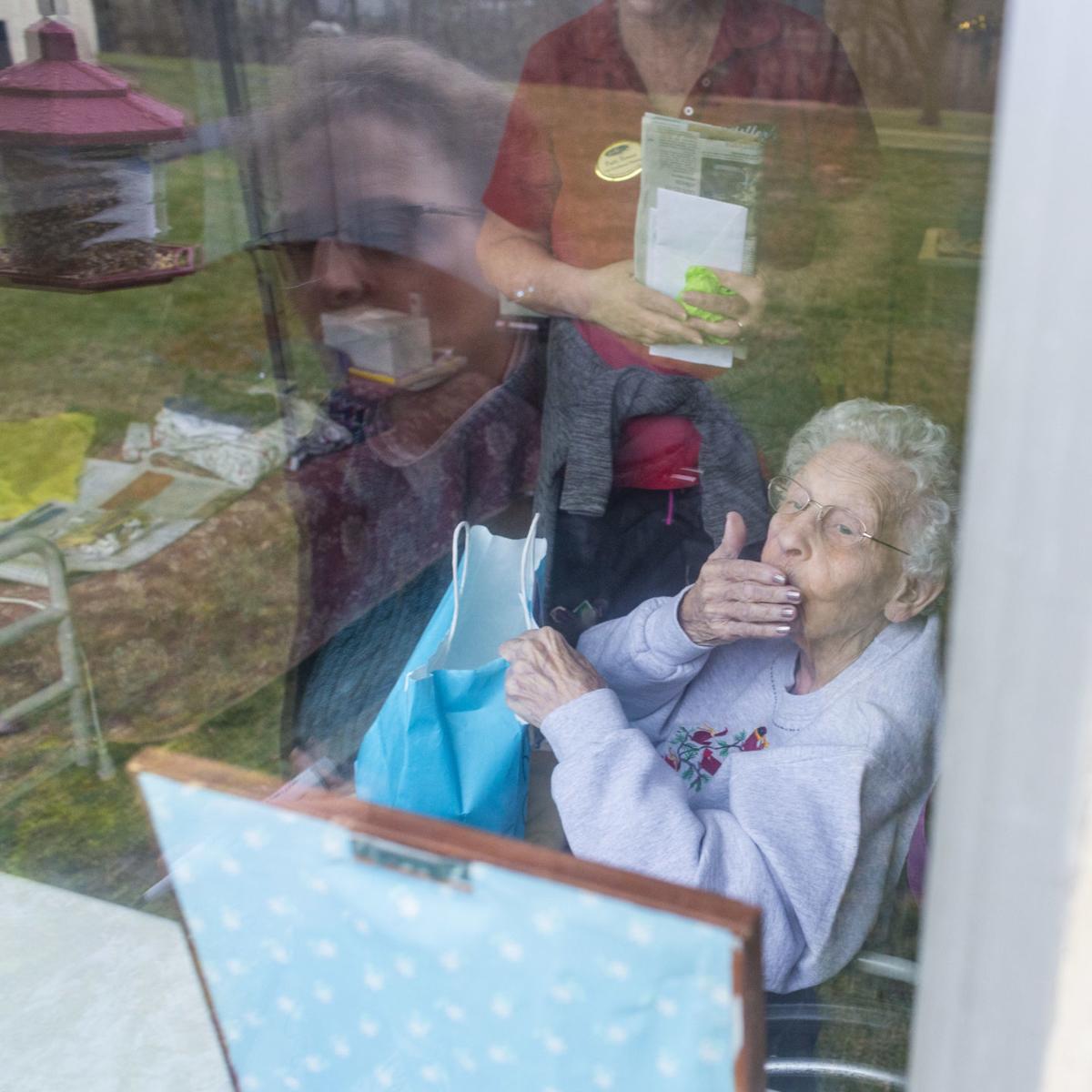 Mary Jane blows a kiss to her daughters after opening her gift bag full of cookies, candies and other surprises. Earlier in the week, Mary Jane asked for a refill of her snack drawer after the daughters asked a question they pose each time they visit: “Do you need anything?” Sharon, Sue and the staff happily obliged, Sharon said with a laugh. 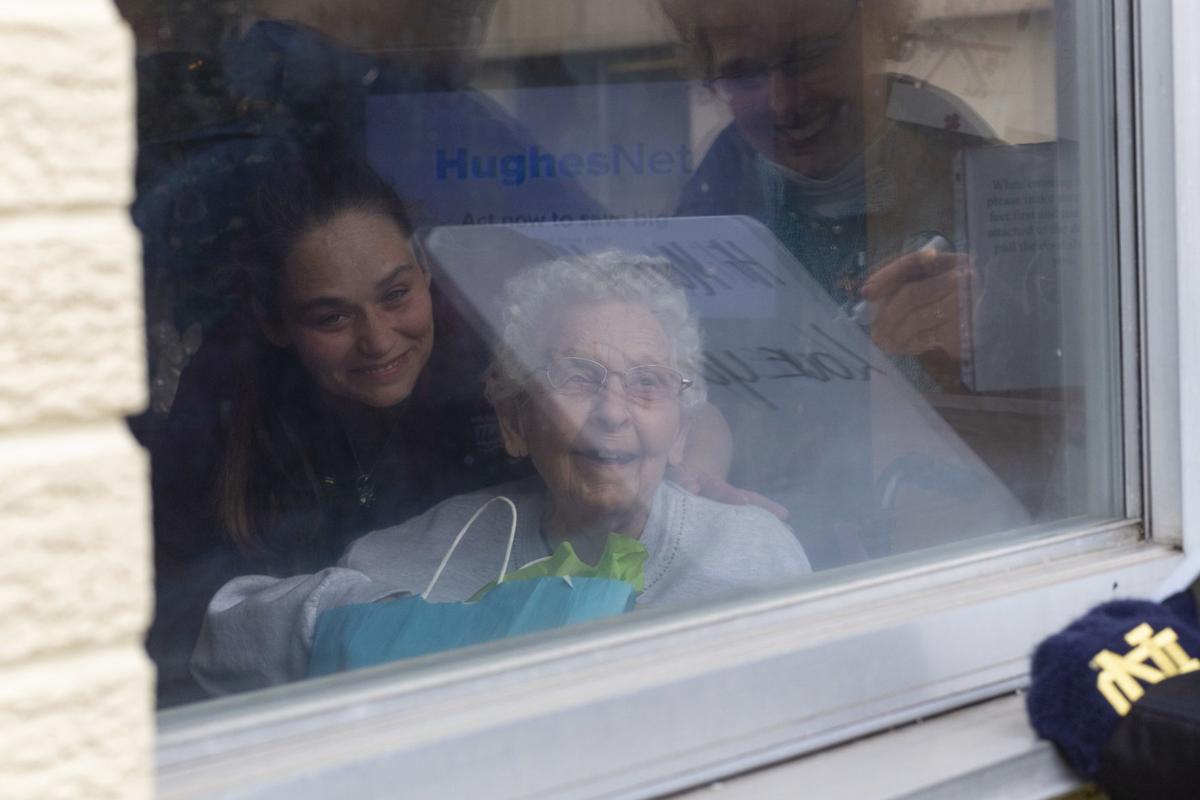 Mary Jane Kline smiles at her daughters after peeking into her gift bag as Sue is pictured in the reflection writing a message on her dry erase board to communicate. 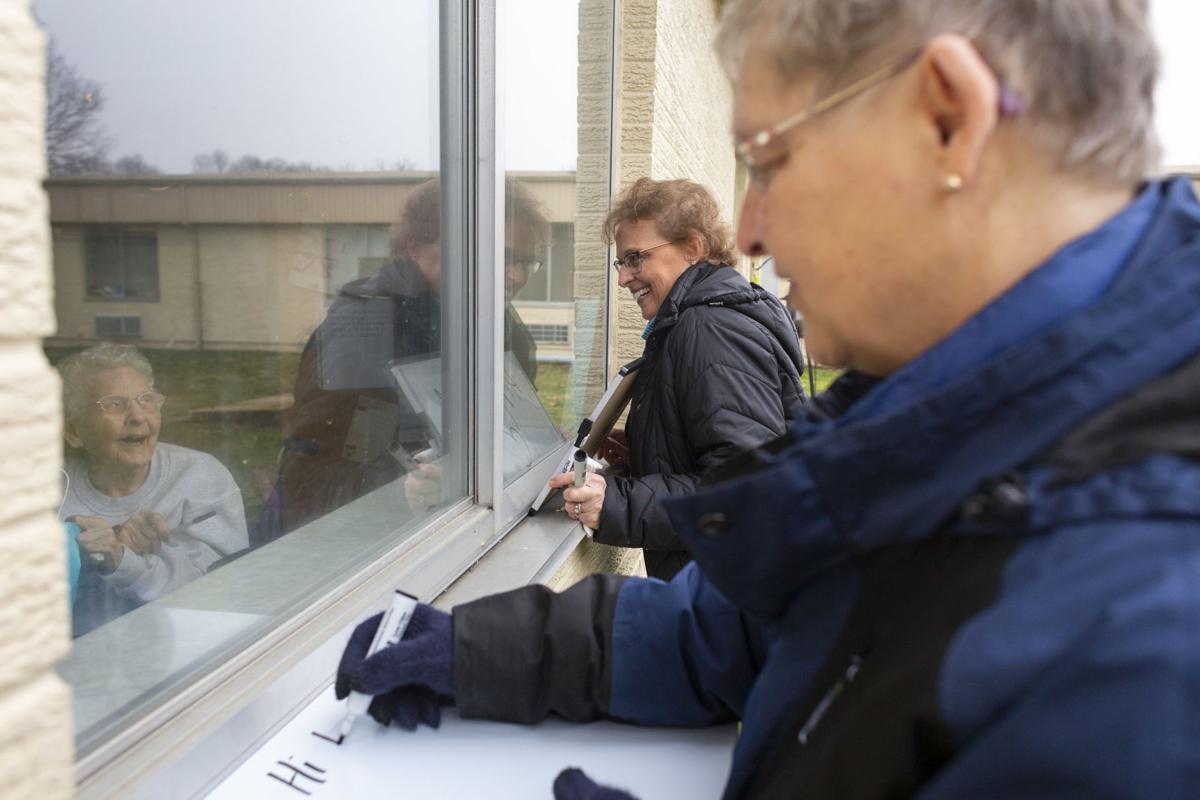 Mary Jane smiles at her daughters as they write salutations outside of her window on March 19. 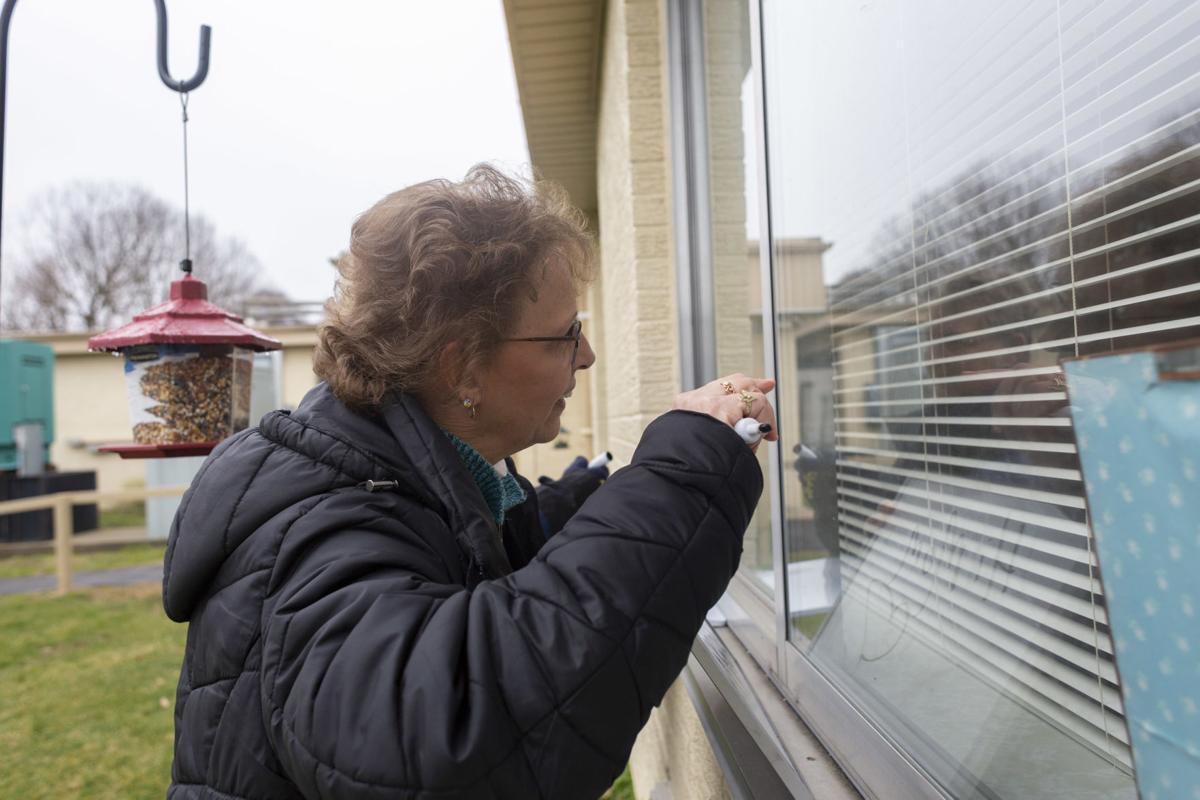 Sue Meadows gestures for someone to raise the blinds outside their mother’s window at Miller’s Merry Manor.

HUNTINGTON – A member of the Kline family has hugged Mary Jane every day since they dropped the 95-year-old matriarch off at the nursing home more than five years ago.

It was on that day when Sue Meadows and Sharon Kline returned from a shopping trip with their mother to find Miller’s Merry Manor in Huntington placed in quarantine to protect its residents from the spread of COVID-19.

“We understand that they have to keep people out so they don’t bring anything else in, but it’s been hard,” Sharon Kline said. “It’s been a long two weeks.”

Every day around noon, Sharon would drink coffee with Mary Jane. Each night, Sue would stop by around supper to catch up with her mom.

“This is what we’ve always done,” Sharon said. “We used to do that when she was at home, so we just kind of keep the routine.”

Now the hearing aids they bought Mary Jane on March 6 come in handy as they refuse to let the pandemic stop them from spending face-to-face time with their mother.

Their new tradition started on March 7 when Sharon and Sue knocked on a shuttered window outside the facility, waiting for Mary Jane to spread the slats of the blinds to peer out.

“Oh, she was tickled when she saw us,” Sharon said. “She just kind of sat there and giggled. It just feels good to see her laugh because I know it’s been long for them too, not being able to go out of their rooms and go down for their meals to socialize. But she never complains, she’s just a happy camper.”

Instead of sitting in the dining room with their mother, they now drop a package off on the front porch, call the front desk and make their way to the back of the facility, armed with dry erase boards.

“They are getting so used to us being out there that they come and put the blinds up for us,” Sharon said with a laugh. “They are so great. The staff, the girls, the aides, they’re wonderful. They are good to mom and it really lifts her up. It makes my heart feel good since I can’t hug her in-person. At least this way we can see her.”

On Thursday before Mary Jane blew the sisters a kiss goodbye, she beamed as she opened a package from her daughters filled with dry erase markers, a sweater and goodies. No matter if it’s through a window pane, through a phone or computer screen, the sisters said they cherish every moment they can spend with her.

“Sometimes it may only be five or ten minutes, but to mom five minutes or five hours, it doesn’t matter,” Sue said. “She gets to see us, and she’s always happy.”

Although the family is used to spending more time together, Sharon said she thinks Mary Jane is getting used to the routine.

“It’s hard because we want to hug her,” Sharon said. “We want to be there to hug her, but on the same token, we can see her smile, we can see that she’s fine and we know that so that’s piece of mind for us. We still have that communication.”

Sue said she thanks God every day to get to see her mother, and Sharon said that tradition won’t be ending any time soon.