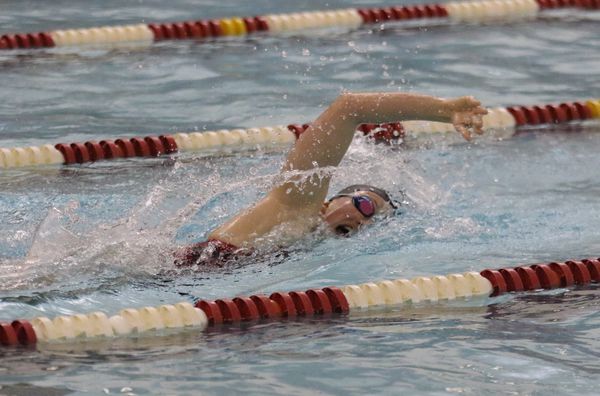 Trent Scott/tscott@perutribune.comSTATEMENT: Maconaquah’s Alaina Simmons was one of three girls’ swimmers that won four events Thursday night in the TRC swim meet against Rochester. Simmons won the 200 and 500 free along with being a member of the winning 200 and 400 free relay teams in the Braves’ 130-49 win over the Zebras. 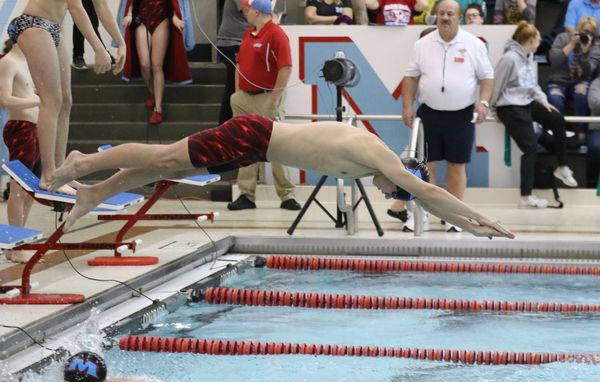 Trent Scott/tscott@perutribune.comSPRING: Maconaquah's Luke Stage makes his way into the pool during Thursday night's TRC swim meet against Rochester. Stage was part of the winning 200 medley and 400 free relays against the Zebras as the Braves won the boys' meet 131-53.

Trent Scott/tscott@perutribune.comSTATEMENT: Maconaquah’s Alaina Simmons was one of three girls’ swimmers that won four events Thursday night in the TRC swim meet against Rochester. Simmons won the 200 and 500 free along with being a member of the winning 200 and 400 free relay teams in the Braves’ 130-49 win over the Zebras.

Trent Scott/tscott@perutribune.comSPRING: Maconaquah's Luke Stage makes his way into the pool during Thursday night's TRC swim meet against Rochester. Stage was part of the winning 200 medley and 400 free relays against the Zebras as the Braves won the boys' meet 131-53.

Anyone looking for a silver lining to knock Maconaquah off the top of the TRC swimming and diving heap came up empty-handed Thursday night when the Braves hosted Rochester.

The two teams have been No. 1 and 2 in the conference since Maconaquah’s arrival but the hosts looked a class above the Zebras on the night, winning the girls’ meet 130-49 and the boys’ meet 131-53.

Braves coaches Janet and Brad McManus said the squads didn’t leave any doubt in the pool as to who was top of the conference ladder.

“The girls are sore and rightfully so as we hit Christmas Break pretty hard for max yards,” Janet McManus said. “We work super hard and we knew they were sore coming in but they are going to see some time drops; this is how we saw them performing.

“We didn’t know necessarily where Rochester was going to put its girls but our girls really performed well and did better than we were expecting; sometimes, I don’t think they’ll do as well as they end up doing and they surprise me.”

“Rochester had their lineup mixed around a little bit with their two big swimmers (Reece Renie and Mason Beall) in different events than we thought they were going to be,” Brad McManus added. “They also had their relays split up and as a result we got 1-2-3 in the 200 medley and 200 free relay.”

“Janet blew me away by dropping two seconds in the breaststroke,” Janet McManus said about the senior. “That was awesome; just when I think she can’t do any better, she does.

“Abby had an awesome night; she didn’t PR outside of the first relay but give her a few weeks and she will. Our golden goggles went to Rachel, who PR’d in diving, stepping up big for us there, and swam backstroke as we were missing a swimmer, something she hadn’t swam since sixth grade, and swam 1:15; she performed her best tonight and we couldn’t ask for more from her.”

Shrock, Johnston and Borden were joined by Erika Baber in the win in the 200 medley relay in 1:57.85 while Simmons replaced Shrock in the quartet that won the 200 free relay in 1:48.95. Shrock and Simmons helped win the 400 free relay in 4:08.61 alongside Kaylinn Teegardin and Hannah Montgomery.

“The medley relay want the record from 1986.” Janet McManus noted. “That’s been the talk of the last week.

“At the relays, they were three seconds off. We started to talk about it, play around with times and see what they needed to get.

“Tonight, they were two seconds away and it would be cool to do that,” McManus added. “There hasn’t been a girls’ record in the pool set since the 90s; they're some tough records to beat and we’re confident this group can do it.”

“Everyone is putting it together; they’re working hard, they’re getting in shape and with guys swimming faster, that gives us more options,” McManus added.

Brad McManus noted the work ethic of the team had picked up over the past few days and pointed towards one swimmer in particular at the forefront of the move.

“Our golden goggles went to Bryant Teegardin,” Brad McManus said.  “He has been pushing himself every day in practice, sometimes to exhaustion, and his work ethic has gotten other guys to work harder; the last three days, we’ve had better practices than we’ve had the entire season.

“Bryant was freestyle all last year but watching at practice, he was so improved in all the strokes we put him in the IM against Wabash and dropped eight seconds in the event tonight.

Maconaquah swims next Monday against Logansport with both coaches expecting changes in the lineup to keep things fresh as the Braves continue to condition and prepare for the conference meet.

“The girls do know we’re hitting it hard and we’re also practicing at night now with the boys,” Janet McManus said. “The boys keep it interesting, which you wouldn’t think so, but they are entertaining, and we’ve mixed up some of the practices to keep things fresh.

“It may seem monotonous at this time of the year but it’s not. We try to keep things interesting.”

“We’re going to mix things up,” Brad McManus added about the Logansport meet. “Right now, every meet is a chance to see something else.

“Is there a surprise where they’re going to place better at conference? Our goal is to get all three guys on the podium in every event; right now we’re three-fourths of the way there.”