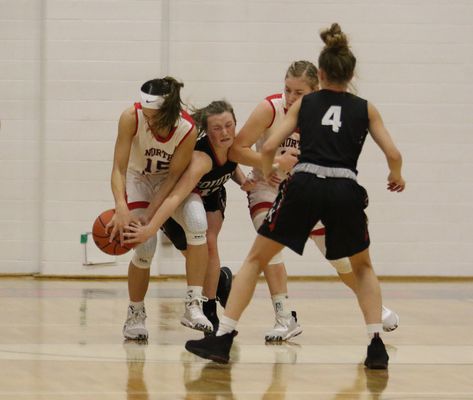 Trent Scott/tscott@perutribune.comDIDN'T NEED THAT: North Miami's Shyloe Hunt (15) wrestles the ball away from a Manchester player during Saturday night's TRC girls' basketball game. The Warrior defense held the Squires under double digits in each quarter, pulling away late to win 49-29. 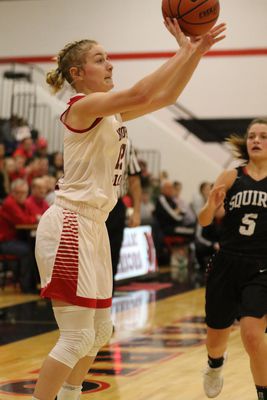 Trent Scott/tscott@perutribune.comSHARPSHOOTER: North Miami jumped out to a 17-9 lead after a quarter of play against Manchester Saturday night and much of that came down to Taylor Tinney (L), who scored 10 of her 12 points in the quarter to get the Warriors going in the 49-29 win over the Squires.

Trent Scott/tscott@perutribune.comDIDN'T NEED THAT: North Miami's Shyloe Hunt (15) wrestles the ball away from a Manchester player during Saturday night's TRC girls' basketball game. The Warrior defense held the Squires under double digits in each quarter, pulling away late to win 49-29.

Trent Scott/tscott@perutribune.comSHARPSHOOTER: North Miami jumped out to a 17-9 lead after a quarter of play against Manchester Saturday night and much of that came down to Taylor Tinney (L), who scored 10 of her 12 points in the quarter to get the Warriors going in the 49-29 win over the Squires.

The Warriors shot out of the gates just like on Thursday, scoring 17 points but when the going got tough, Bailey Keim seized control, running off a personal 8-0 run that turned a four-point lead into a 12-point gap the Squires never recovered from as the hosts won 49-29.

North Miami head coach Lori Working said the girls gave her the start she wanted again and got a boost from the younger girls throughout the night.

“When we were over at Taylor we said they had to come out ready to play ball,” Working said. “It couldn’t be me firing them up all the time.

“Our gameplan and mental focus was a game changer for us,” Working added. “We’re trying to get after it and now the biggest thing is to get some of the younger girls involved.”

Mackenzie Day opened the game with a three for Manchester but the hosts scored the next 10 points to establish an early lead.

Taylor Tinney scored to get the Warriors on the board before Hannah Hall added a three and Tinney converted a three-point play.

Maryann Freeman notched a pair of free throws to complete the 10-0 run before the Squires pulled to within two after Makenzy Meyer beat the North Miami press for a layup and Kiera Hatfield connected with a three.

Freeman scored on the inside while Tinney added two free throws and banked in a three to extend the lead out to 17-8.

“The last two games Taylor has been impressing me all the time,” Working said about Tinney’s first quarter. “I’m not sure who scored what but I know in the last game we had four girls in double figures and it’s hard to beat a team when they have four and five kids in double figures.”

Emma Garriott hit a free throw to end the quarter but Freeman started the second period with a basket to extend the lead to double digits at 19-9.

North Miami lacked scoring touch on the inside throughout the period, missing numerous looks around the basket and Manchester pulled to within six after Garriott and Meyer scored at the rim.

Freeman would answer both baskets though the Squires would be within single digits at halftime after a Morgan Parrett free throw made it 23-14 at the break.

Tinney opened the second half scoring but the lead was halved midway through the period when Beletu Stout hit threes from the right wing then the left wing.

Freeman scored off a miss but Hatfield added a third three in the period to trim the Warrior lead to 27-23.

Keim, who had been kept off the scoreboard and frustrated by the Manchester defense, took over from that point, scoring on a drive before adding two free throws and scoring off steals either side of the end of the quarter to kick the lead out to double-digits for good at 35-23.

“Leadership is important,” Working said about Keim’s run. “Bailey was getting frustrated in the first half and we told her that her game will come; she just needed to stay focused and steer the group.

“That’s what I love about Bailey: when it gets closer, she steps up and takes over. She wanted the ball, she wanted to attack and that’s what we need.”

Meyer scored on the other end before Hall added two free throws after Ranissa Shambarger missed two and Keim scored on a twisting drive to make it 39-25.

The Squires struggled from the line throughout the period, only hitting 2-of-8 free throws, and couldn’t keep the Warriors from salting away the game late and extending the lead to as many as 21 points before the final horn.

Keim and Freeman led all scorers with 14 points, the former scoring all of her points in the final 11 minutes of the game, while Tinney added 12 points and Hall scored nine points; the hosts shot 15-of-17 at the free throw line.

North Miami, moving to 11-5 on the season and 2-3 in TRC play, hosts Lewis Cass next Wednesday starting at 6 p.m. and while Working noted the Kings were in a rough spot, the girls had their own areas to focus on throughout the game.

“I’ve gotten to know (Lewis Cass head coach Kyle Amor) as they came to our summer games,” Working said. “They’re struggling and while they’re down this year, we tell the girls not to play down to another team’s level.

“There are things we have to work on and we need to focus on different things.”