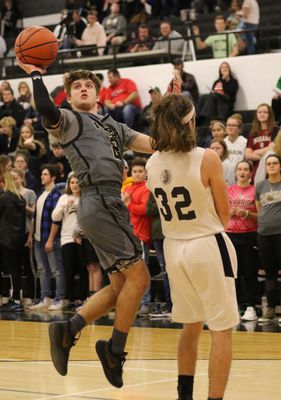 Trent Scott/tscott@perutribune.comSLIDE BY: Peru’s Kade Townsend (2) contorts around North Miami’s Braxton Beall (32) for a look at the basket during Tuesday night’s TRC boys’ basketball game. Townsend led the Tigers with 16 points, 11 of which came in the third quarter, as the visitors remained unbeaten in TRC play with a 54-40 win over the Warriors. 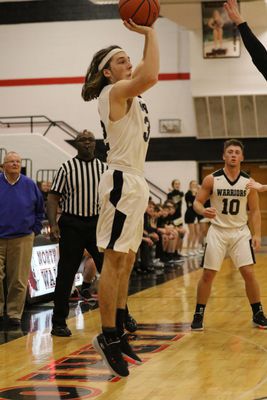 Trent Scott/tscott@perutribune.comTHREE FOR THREES: North Miami’s Braxton Beall pulls up for one of his three three-point connections during the third quarter of Tuesday night’s TRC boys’ basketball game against Peru. Beall had 11 points for the Warriors in the 54-40 loss to the Tigers.

Trent Scott/tscott@perutribune.comSLIDE BY: Peru’s Kade Townsend (2) contorts around North Miami’s Braxton Beall (32) for a look at the basket during Tuesday night’s TRC boys’ basketball game. Townsend led the Tigers with 16 points, 11 of which came in the third quarter, as the visitors remained unbeaten in TRC play with a 54-40 win over the Warriors.

Trent Scott/tscott@perutribune.comTHREE FOR THREES: North Miami’s Braxton Beall pulls up for one of his three three-point connections during the third quarter of Tuesday night’s TRC boys’ basketball game against Peru. Beall had 11 points for the Warriors in the 54-40 loss to the Tigers.

Peru and North Miami rang in the new year in the northern half of the county Tuesday evening, playing out one of the two matchups that did not occur in the Miami County Classic boys’ basketball tournament.

A slow start for both teams gave way to a back-and-forth third quarter and while the Warriors were within two points with six minutes to play, the Tigers finished the game on a 13-1 run to win 54-40.

Peru head coach Eric Thompson said it took a half to get back into a rhythm but the players got back to what they did best in the second half and continued their good start to TRC play.

“(North Miami) did a nice job of knocking down shots that were set up for them in their individual spots,” Thompson said. “That made it rough on us as we were missing some shots but give credit to them.

“They did a really good job the entire game but just didn’t hit the same shots in the second half. We played better defense, rebounded a bit better and got some points in the paint because we started hitting a couple of balls from the outside.”

North Miami head coach Basil Mawbey said the team hung around in another conference game but still were missing that little bit necessary to get over the hump.

“We were right in the game,” Mawbey said. “We have to be a little more selective on our shots as we had places where we had mismatches to work on but didn’t work out very well as we had the wrong person with the ball.

“Overall, the kids played so well. We’re that close to being a really good team but we’re just not there yet and hopefully by the end of the year we’re there.”

The game opened at a very methodical pace on both ends with Matt Ross scoring the opening basket and Treyden Curtis knocking down 2-of-4 foul shots for an early 4-0 lead.

Tristan Working scored twice in reply, the second off an Austin Smith steal, to tie the game at 4-4.

Kade Townsend scored close to the end of the half before Curtis picked up a second foul, joining North Miami’s Darian Hanley on the bench.

Working managed to end the quarter at the line, having been fouled with less than a second left, to tie the game again and started the second period with a three to give the hosts a 9-6 lead.

Curtis picked up a third foul a minute into the period, sitting the rest of the half.

Nate Musselman became the first Warrior other than Working to score, notching a three, before Working scored again to build up a brief 14-8 advantage.

“Nate was instrumental in us playing well tonight,” Mawbey said about Musselman’s first half performance. “Hanley getting in foul trouble did not help us but Connor Wilson played fantastic; he missed a couple of shots he could make but his defense was fantastic and those shots were there.”

Peru responded with a 10-0 run, starting with a Townsend three before Pete Polk scored on a putback, Michael Chandler dropped in a three and Daunte Majors scored off a steal.

Musselman had the last say of the half, hitting his second three to make it 18-17 Tigers at halftime.

“The opportunities were there to get out on the break but we played slow and sluggish in the first half,” Thompson said about the low score at the intermission. “We got locked into their style instead of doing the little things that we’ve done to this point.”

Action began to pick up in the second half, starting with a Braxton Beall three and a Working layup off a Hanley steal to push North Miami back in front 22-18.

Townsend sparked another 10-0 run for the visitors by sinking a pair of threes around two Ross free throws before adding a drive to the basket, flipping the lead back to Peru at 28-22.

The Warriors responded with an 8-1 run of their own as Working and Beall hit a free throw each before Beall and Musselman sank threes to take the lead again at 30-29.

Curtis went to the line to notch two free throws before Majors added a three point play with two minutes left in the period.

Thompson said as the speed of the offense picked up, space on the floor naturally created itself.

“Things were in the game plan in the first half but we were sluggish, not throwing passes quickly enough and standing around a lot,” Thompson said. “When we reversed the ball quickly, good things happened.

“We were caught in a lull early and when you add in coach Mawbey and a county rival, anything can happen. It was a good thing our guys shook the rust off in the second half and started playing our style of basketball.”

Beall struck again from deep but Townsend answered on the other end and Ross added two free throws after the horn had sounded to give Peru a 41-35 lead heading into the final eight minutes of play.

Working sank two free throws to start the fourth quarter while Musselman scored to trim the gap to 41-39.

That would be as close as the hosts would get, however, as North Miami would only score a single point the rest of the way on a Beall free throw.

By that point the Warriors were down 13 as Ross hit two free throws and Curtis hit a key three midway through the period. Both players added baskets on the inside in the closing minutes and Majors knocked down two free throws to ensure Peru remained unbeaten in TRC play.

“Our guys were staying down,” Thompson said about the defense late in the game. “Working is a good scorer who knows how to hesitate and got our guys off our feet.

“When our guys stayed down and didn’t give him a look at the basket, good things started happening. Our game ball went to Pete for his defense and rebounding efforts tonight.”

“We go in spurts like that, like against Caston where they scored 14-straight points,” Mawbey said about the scoring drought. “We just, in those situations, have to grind more and take just a bit better shots in that moment.

“We can’t let those two and four-point spurts turn into 10 points because those are hard to come back from. We did come back earlier but it takes so much energy that eventually we ran out of gas.”

Ross led the Tigers with 16 points and Townsend added 15 points while Majors and Curtis scored nine points each.

Working led all scorers with 18 points while Beall and Musselman added 11 points each, though no other player for the hosts scored in the game.

North Miami, sitting at 3-7 and 0-3 in TRC play, travels to Manchester Friday night start at 6:15 p.m. with Mawbey wanting just that bit more from the team to take them over the top in conference play.

“Manchester is a good basketball team,” Mawbey said. “Our conference is very balanced this year; having seen everyone, anyone can beat anybody on a given night and every night you have to be ready.

Thompson said the guys had to be locked in from the opening tip as the Golden Eagles and Kings would come right at them.

“Tonight, we didn’t show up ready to play; maybe it was the name across the jersey that bothered us or their great play, great shooting and coach Mawbey. Oak Hill and Lewis Cass are both well coached by veteran coaches; one is going to play match-up zone and press, the other is going to play aggressive man-to-man defense and we have to be ready to play and take what they give us.”