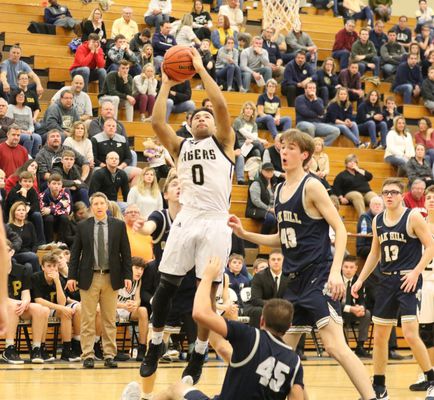 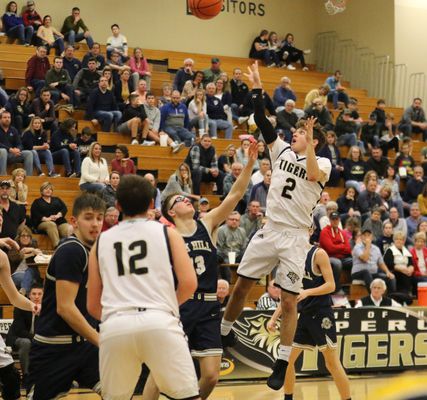 Trent Scott/tscott@perutribune.comFLICK: Peru's Kade Townsend (2) fires a quick jumper over an unprepared Oak Hill defense during Friday night's non-conference boys' basketball game. Townsend scored 11 points for the Tigers, including a crucial seven points late in the second quarter, in the 60-50 win over the Golden Eagles.

Trent Scott/tscott@perutribune.comFLICK: Peru's Kade Townsend (2) fires a quick jumper over an unprepared Oak Hill defense during Friday night's non-conference boys' basketball game. Townsend scored 11 points for the Tigers, including a crucial seven points late in the second quarter, in the 60-50 win over the Golden Eagles.

Peru head coach Eric Thompson said after Tuesday night’s game at North Miami that he wanted the team to show up ready to play Friday night against Oak Hill.

The coach got what he wanted as the Tigers exploded out of the gates early, leading by as many as 14 points, before the Golden Eagles rallied to tie the game in the second quarter.

A key seven-point swing before halftime and only allowing five points in the third quarter helped the hosts reestablish their double-digit lead en route to a 60-50 win.

“We did just enough to keep them at bay and around double-digits,” Thompson said. “Oak Hill’s a really good team and we knew they’d come back after we got a good start.

“We hoped they wouldn’t but they have too many good players that are well-coached and basketball is a game of runs.”

Peru started off the game with four Daunte Majors free throws around a Kody Dubois field goal for a 4-2 lead.

Majors and Michael Chandler followed with back-to-back threes to make it 10-2 while Treyden Curtis added two free throws to open up a double-digit lead at 12-2.

Tahj Johnson scored but Chandler answered with a three and Majors scored to make it 17-4.

Chandler hit his third three of the period to increase the lead to its largest in the first half at 20-6 before Clay McCorkle hit a three in response as the Tigers took a 22-11 lead into the second quarter.

“The guys did a really good job of stymieing everything Oak Hill wanted to do early; they made great adjustments in the second quarter and we had to make adjustments. It was a really fun game.”

Johnson scored the last basket of the period for Oak Hill and the visitors made it seven-straight points after a McCorkle basket and a Dubois three, trimming the gap to 22-16.

Matt Ross got the hosts on the board in the second quarter but another Dubois three and two Johnson free throws made it a 24-20 game.

Tristen Hayes brought the Golden Eagles to within a basket at 24-22 midway through the period and the game was tied at 26-26 off a McCorkle basket.

A tenuous situation was broken when Kade Townsend hit a three and was fouled after the shot, converting a four-point play and following it up with a second three to give Peru a 33-26 lead.

Hayes hit a free throw before the break though the Tigers nearly hit another three to close the half and took a six-point lead into halftime at 33-27.

Neither squad shot out quickly to start the second half as Majors and Johnson traded baskets in the first few minutes.

Oak Hill’s offense could not find the rhythm it had in the second quarter and eventually the Tigers took full control of the tempo as Majors and Ross notched baskets to reestablish a double-digit lead at 39-29.

Chandler was then fouled on a three and made all three fouls shots while Pete Polk added two baskets at the end of the period to give the hosts a 46-32 lead heading into the fourth quarter.

“Oak Hill has two nice big men and when they were in there together, we had to keep them off the glass,” Thompson said about the changes between the second and third quarter. “In the second quarter, we didn’t do a good job of rebounding or getting the 50/50 balls but we did a better job of it in the second half.

“Our guys did a nice job of recognizing what defense they were in in the second half; they kept the turnovers down and got the shots we wanted from who we wanted them from.”

Peru’s lead would be as large as 15 in the final quarter as Oak Hill tried to find a route back into the game.

Ryan Pederson got the lead into single digits with a jumper midway through the period and Johnson brought the visitors as close as seven points in the closing minutes but the Tigers were in their element late on, connecting on 10-of-14 free throws in the final quarter, to pick up their eighth-straight win.

Johnson led the Golden Eagles with 14 points while Dubois added 13 points in the loss, the first back-to-back losses of the season for the team.